On March 11th just before 1 AM Arizona time, I received a text from my son, “Turn on the TV.” I sat with disbelief as I watched CNN and listened to Japanese National News (NHK) streaming on my computer. A 9.0 earthquake and powerful tsunami were devastating Japan. I was born in Tokyo of Lutheran missionary parents and spent my childhood years in Hiroshima. I attended Japanese school where we were taught “doutoku” or ethics, and played with Japanese friends. Growing up among the Japanese, I learned so much about community and the importance of compassion, and meeting the needs of others. I have been so proud to listen to the news reports that the Japanese people are responding to their unthinkable losses with great calm and orderliness. After my graduation from high school, I came to the U.S. to attend college. Outwardly my face is Caucasian, inwardly my heart is largly Japanese. Having lived in the U.S. for longer than my years spent in Japan, I cherish loving two countries, two cultures and the peoples of both. When the earthquake shook Japan and the tsunami wiped the land clean, my first thought was “I don’t know anyone who lives there.” Having friends in many cities in Japan, and as an active volunteer in Arizona’s Japan-related activities, I quickly learned just how closely I am tied to the Sendai area. 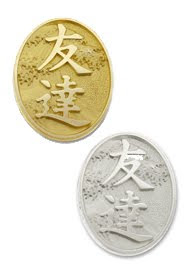 I found myself tugged with concern about the people of Japan, now also facing ongoing problems and great concern about radiation exposure from their nuclear plants. I wanted to do more. With the support of Terryberry and the sponsors of Arizona Japan Relief, my simple sketch was turned into a beautiful jewelry design. The famous Hiroshige (the artist) woodblock of a wave (circa 1700’s) is used as the backdrop, and the Japanese “kanji” (characters) Tomo (friend) and Dachi (to reach out) and read together as Tomodachi (friendship) create the message. While this word has great meaning on its own, it also supports our (U.S.) military efforts in Japan’s relief called Operation Tomodachi.
I encourage you to support this fundraising effort. Please share it with your friends and family. Give a memento from this site as a meaningful gift. For our military, they can proudly wear the Tomodachi Lapel Tac or Pendant, knowing that the money paid supports their generosity to the people in Sendai. 100% of proceeds are earmarked for aid to Japan through the American Red Cross Earthquake Relief Fund.
While I feel very far away from those in need in Japan, there is that feeling of “what can I do?” I am warmed with the knowledge that I work with a group of people with great energy and philanthropic values. Together, with your help, we can make a difference to those affected by the horrific natural disaster in northern Japan. 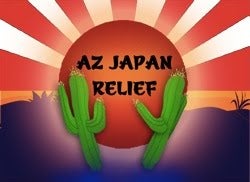