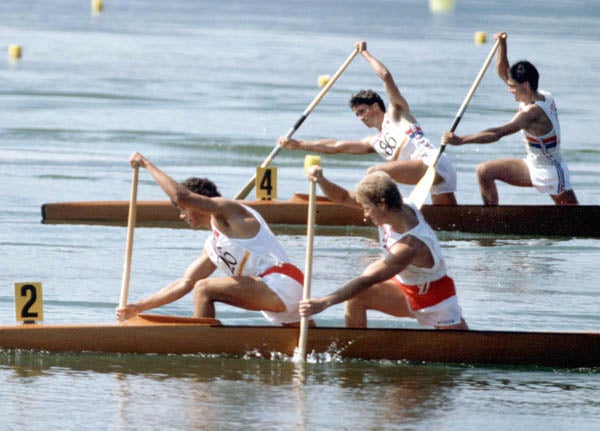 Eric Smith and Steve Botting competing in the 1984 Olympics

If there is a lesson to be learned from the Olympics, that lesson is that a key motivator for high performance is recognition.

I came to this realization from a unique perspective; not only do I work for the best company in the Recognition industry but I have also been married for 28 years to a two-time Olympian.

Like many people across the world right now, I have been glued the television watching as athletes from around the globe compete in the Olympics.  They are recognized by the media, their peers, and their countries for their successes, but at the end of the day athletes compete for the ultimate recognition of excellence in sport, an Olympic Gold Medal.
Olympic athletes represent the highest performers in their sports, and their performance is driven by many factors.  It has been an inspiration to watch Usain Bolt and Andre de Grasse bond on the track. Their friendship, mutual respect and appreciation for each other’s skills creating not only a desire to succeed but also fueling their individual quests for gold. The goal of receiving a gold medal is burnt in their minds and drives the will to train and perform at ever increasing levels.
If you think about it for a moment, employees are not too different from athletes.

Like Olympic athletes, high performing employees are also driven by many factors, and one of them is recognition.

They are cheered on by their co-workers and companies for their successes.  The gold medal for a high performer in sales may be very different from a gold medal for a tech support specialist, a receptionist, your machinist or your executive management team. The lesson to be remembered and learned from the Olympics is that each of us have a gold medal that we are striving to win and that drives us to excel for our organizations every day.