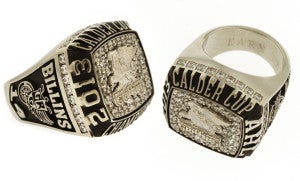 When the Terryberry’s hometown hockey team, the Grand Rapids Griffins, secured their first Calder Cup Championship win by defeating Syracuse in June, Terryberry employees were elated.  When Terryberry was chosen to handcraft the team’s Calder Cup Championship rings, for many of us it was a dream come true.
The Griffin’s Championship Rings were a special treat to produce.  Watch the video the Griffins put together on how the rings were made.
Learn more about award rings for the champions in your organization.