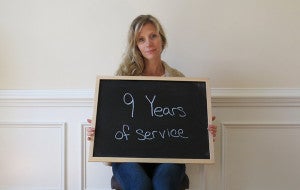 I read an article the other day on service awards, and if I’m being honest, it kind of ticked me off.  The author starts out: “No worker has ever received an engraved plaque that read ‘Thanks for keeping your seat warm for 10 years.’  Yet that is the message employers send with awards for employees’ five, ten or 20-year anniversaries…”  I’ve read a few posts and articles now picking up on a similar theme– questioning the value of recognition for service milestones.
I’d like to offer a different opinion.  I myself have been in my current role for 9 years.  I’m coming up on a milestone 10 year anniversary next year.  (It’s February 7, if you’d like to send a greeting.)  I am invested in my role, and in the company to which I have decided to dedicate a good portion of my career. You bet – if  my company ignored my service anniversary it would have a damaging impact on my level of engagement.  Frankly, it would hurt my feelings.  I’ve given a significant amount of personal time and energy to my work because I care about leaving a lasting, positive contribution on the company I have chosen to serve and the team of which I am a part.
Being in the Employee Recognition business,  I’ve heard comments like, “we should recognize performance and reward outcomes.”  Yes, I agree with all that…in part.  But, in my mind, authentic recognition is more than ticking off a mark next to objectives.  I contend that if you want to engage your employees through recognition, you need to do more than recognize the performance.  Don’t forget to recognize the PERSON.
An employee’s service anniversary is an ideal time to highlight achievements and contributions over the past year, and over the course of an individual’s career.  If you’re not doing that as part of your service award presentation, it’s probably time to start.   At the same time, I’d like to offer the idea that a career is a relationship.  If my husband of 16 years had forgotten or ignored our anniversary last year, he might have found himself in the doghouse.  It’s not about gifts or flowers; but the gifts and flowers send a message: that I am important to him and that he is glad that we are connected.  My relationship with my coworkers is a different thing than my marriage for sure, but it’s still an important relationship to me.  And I still want to hear that message that I am valued and that my presence at work matters.
Ok, I get it. Businesses need to watch the bottom line, and maybe all this is too much mushy touchy feely stuff for some. So let’s look at bottom line numbers.  Replacing an employee who quits will cost anywhere from 20% for jobs earning less than $50K per year, to 213% for executive level positions.  In addition, fully 71% of the US labor force is on the job market.  If your business can move the needle on the cost of turnover by sending a message to your workforce that their service matters, isn’t that worth it?
Let’s also look at employee engagement data for a minute.  According to Gallup’s report, 13% of employees are highly engaged and 24% are actively disengaged, leaving 63% in the middle.  Let’s just say for argument’s sake that your highly engaged folks are getting the recognition that they need.  And your disengaged employees don’t deserve any recognition anyway.  That still leaves nearly two-thirds of the average organization’s employees who fall in the middle and are likely the backbone of the business.  Consider this: these 63% are probably the behind-the-scenes people who are doing a lot of the heavy lifting day-to-day to keep your business moving forward.  They are probably not getting showered with confetti and applause on a regular basis.  What might it mean to Terry, who’s been shipping your business’s packages to customers for five years; or  Morgan, who knows the ins-and-outs of your company’s billing processes, to hear on their service anniversary that their efforts have been noticed and appreciated?  What might it mean to Morgan and Terry’s peers — who maybe haven’t been at the company as long —  to see their friend and co-worker be recognized for their contributions.
I remember the first service award event I attended as an employee of Terryberry a few months after I was hired.  I received a welcome aboard award, which was cool. And I remember watching Mike Byam, the company’s Managing Partner, as he spoke about each person who was receiving an award.  From the factory floor to the executive offices, Mike knew all their names, their personal interests, their achievements, and how they impacted the company.  That year, one individual was retiring after over three decades with the company.  He teared up when former employees, current peers, and family members shared about how he and his work ethic had impacted them.  That event in 2005 communicated to me what Terryberry is about.  It helped me understand the mission, vision and values of the company of which I was now a part.  And it did so in a way that a handbook or onboarding document could never have done.   Nearly 10 years later, it still has an impact on me.
Plug that into your engagement metrics spreadsheet.
To circle back to the author’s comments I mentioned at the start, if your company has employees who are doing nothing more than “keeping the seat warm for 10 years,” then maybe you have bigger issues.  But if your company has employees who have dedicated a good part of their lives in service to your mission, then may I be so bold as to say, that’s worth a little recognition.