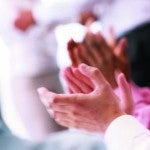 Forbes Contributor, Victor Lipman, brings up a great point in his article “How to Boost Employee Engagement With Two Simple Words,” that while creative recognition ideas and rewards are great to use, “nothing is more effective than a sincere thank you for a job well done.”
Victor Lipman offers up two observations he has made after decades of management, as well as a brief story about his own simple “Thank you” he received:
1) “Recognition (or lack thereof) is always a key element of employee engagement.
2)  In a business environment where people are extraordinarily busy and routinely asked to do more with less, all too often successful tasks and projects are completed without recognition for those involved.
The pace is frantic so when one job is done, it’s on to the next.  Taking the exceptionally small amount of time it requires – by email, vmail, text, tweet, FaceBook, phone… or best yet (a novel idea) in person – to stop what you’re doing and say a simple thank you is one of the easiest, cheapest and best investments an executive can make.
Appreciation can be a difference maker, just as silence can.   A brief story from my own career…
Back in another millennium I once wrote a speech for a chief operating officer addressing a major sales conference.  The COO, a man of around 60, had made a habit of running three miles a day every day, literally never missing a day for over 700 days, even in the coldest months of a New England winter.  The speech focused on his running and what it meant to him, but more importantly it was a metaphor for the day-in, day-out discipline that a top salesperson needs, and ultimately the satisfaction derived from such focused efforts.   It was a personal, heartfelt message.
I didn’t attend the conference, which was thousands of miles away, but the day after it ended I received at my home a large fruit basket.  With it was a short note from the COO telling me simply how he appreciated my help with the speech and how well it had been received.
That was many years ago.  I never forgot the gesture, and you can be sure it forever shaped my opinion of the man and the lengths I would go to do my utmost best for him.”